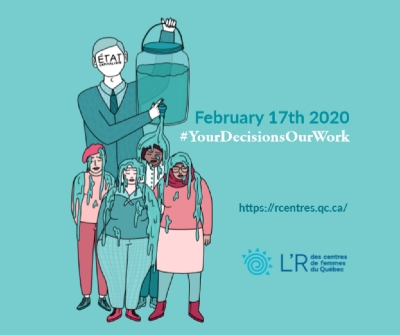 Montreal, February 17, 2020 – Today, in every region in Quebec, groups from women’s centres are demonstrating at their MNAs’ offices in order to make their elected officials aware of the impact their political choices have on women. They are asking MNAs to commit to consulting women’s centres in their region before making decisions that may have consequences on women’s lives and their pursuit of true equality.

“Women’s centres have a unique expertise in the lived experiences of women, not only across the province but also in each region,’’ notes Diane Messier, the group’s president. ‘’Each year, over 260,000 women come to women’s centres across the province, which means that we are well-informed when it comes to making decisions that may impact women’s lives.’’ This year, an issue that preoccupied many women was the impact of invisible work on their lives.

Invisible work, a consequence of neoliberalism

After compiling nearly 5000 responses on its “invisible work calculator”, L’R des centres de femmes estimates that women in Quebec do an average of 26.5 hours of invisible work per week. “The amount of invisible work done by women is proportional to the erosion of the social safety net,” explains Diane Messier. The social safety net is damaged by neoliberal policies, particularly by cuts to health services and social services and by the constant underfunding of the community sector. “In these fields, it is mainly female workers who are affected by cuts and poor working conditions, and it is mainly women who try to make up for the lack of services by doing invisible work. We want to make sure Quebec’s elected officials are aware of the impact that all this has on women”.

We have produced an informative leaflet as well as a project done by users of the women’s centre on the theme of invisible work to give to elected officials. We ask that all MNAs commit to contacting women’s centres that are members of L’R des centres de femmes du Québec the next time that they find themselves with a decision to make that could have an impact on women’s lives and their pursuit of true equality.