We’ve been stuck with invisible work and the mental load for too long. It’s time to set ourselves free!

We’ve been stuck with invisible work and the mental load for too long. It’s time to set ourselves free! 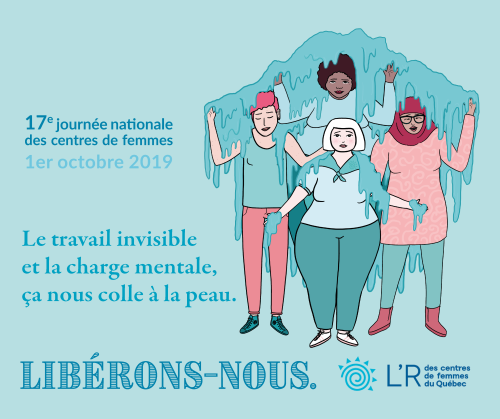 Montreal, October 1st, 2019. – Today, L’R des centres des femmes, an organization representing women’s centres throughout Quebec, is unveiling the results of the online calculator it launched on May 1, 2019. We invite women to go to their local women’s centre in order to take part in a consultation which will develop a series of specific demands to ensure that invisible work and the mental load are valued and paid for.

“Thanks to the results of the online calculator, L’R des centres de femmes estimates that women do an average of 26,5 hours of invisible work!” says Odile Boisclair, the cocoordinator of L’R. Since May 1, 2019, 4 995 women, 480 men and 14 non-binary people have used the calculator.

Invisible work and the mental load

Invisible work and the mental load are major obstacles to gender equality. While twothirds of invisible work is done by women and girls, it only contributes to 5% of the world’s income. Invisible work denotes work that is not officially recognized as such and which is not accounted for in creating wealth on a national scale, such as: housework, care work, the work of mothers and grandmothers, volunteer work, women who work for their partner’s businesses, etc.

Women’s poverty is directly linked to the lack of societal value and the invisibility of traditionally feminine jobs and professions. The energy that women use for unpaid, invisible work could be used elsewhere. Because their availability outside of regular work hours is often used for tasks that go unrecognized, women cannot spend as much time as men do on hobbies, political life, health and self-care, career development, education, or on developing skills which will be recognized and valued.

It’s our turn to decide how this story will end!

“Today, as part of #DQWC2019, women’s centres throughout Quebec are continuing to demand the recognition of invisible work,” says Boisclair. After viewing the video ​La p’tite histoire du travail invisible, which describes how this feminist struggle began, women are invited to join a consultation which will choose the specific demands L’R will promote to valorize and compensate invisible work and the mental load. With 35 years of mobilization experience to draw on, L’R is well-placed to support all of the women who take on this struggle.